Invasion of the Astro Monsters was the first Godzilla film I watched. I vividly remember sitting with my family, being allowed to stay up late, ready to watch my first ever Godzilla film which was part of Channel 4’s “Creature Feature” season. What followed was a weekly event of seeing a new dubbed monster movie, previously to this I had only seen things like Jason and the Argonauts or The Land that Time Forgot, but I digress. My point being that in addition to Godzilla himself, Rodan and Ghidorah hold a special place for me, as they were the first set of Toho kaiju that I was exposed to. Not a bad introduction either, two giant dinosaurs and a three headed space dragon are what little Paul saw, and it captured his heart and imagination. Now Ghidorah is clearly a favourite, appearing in different forms throughout the series. Appearing soon in both the anime and Hollywood Godzilla, now would be a perfect time to look back at his roots. I will also mention that personally, whilst this holds a sentimental place, I prefer the 90’s Godzilla vs King Ghidorah as my favourite incarnation.

With that background out of the way, let us look at the X Plus 1968 Ghidorah! If you would prefer to watch a video of me covering the whole model then please watch the YouTube video here. If not, carry on reading…

Let’s begin with the packaging. They’ve spared every expense with the box. It’s just a bog standard cardboard box, but with a black printed image of Ghidorah. It’s not very clear or detailed, just backs up the writing which states its Ghidorah (1968). There are a few warnings and contents stuck on the back near the bottom and the sides are completely blank. This is in stark contrast to my S.H Monster Arts having premium packaging that showcase the different poses, or even my X-Plus Godzilla 1991 which shows off (in colour) the model you’ll be getting inside the box.

Inside the box is some nice chunky polystyrene keeping the model safe and snug, along with the parts also being wrapped in a plastic bag. The model comes in 3 parts: the body and one wing inside the clam shell of polystyrene and the other wing on the outside. This wing is in a grove, but means that it’s not as well protected as the rest. Always a concern when importing as it might get knocked about a bit on the plane/ship.

Now for the model. I’ll break this down to head/neck, body/wings, legs/feet and tails. 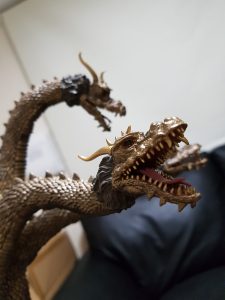 Head/Neck – The first thing that pops is the eyes. It’s the fact that they are a shiny bead, rather than just painted**EDIT I’ve been informed the eyes are just painted. They have just done an amazing job!** It really makes them stand out and its touches like this that makes the model so beautiful to look at. The mouths are all open a different amount with the tongues in different positions. The teeth are all painted perfectly and the horns/face have a good level of detail. The necks are all scaled as you’d expect, each scale is slightly raised and has a fold line, so it’s very detailed! The issues I have with the neck are 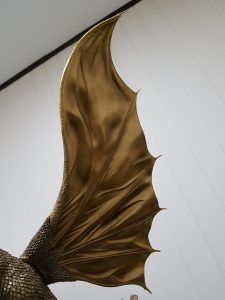 Body/Wings – So the body is spot on to what you see in the film. The whole thing has individual scales, again, these are all raise and have an individual fold line. There are the indents you’d expect for a main wearing a suit, and even a line down the back where the zip would have been for the actor. The wings are massive, and have the claws at the end and lines down them to simulate where the wires would be. There isn’t a massive amount of detail her, but then there isn’t in the films either. To be honest, this whole section is screen perfect. 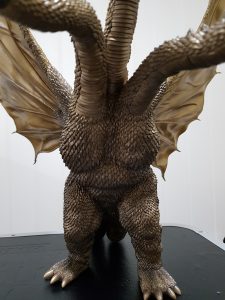 Legs/Feet – I can’t say I’ve really noticed this part of him in the films to compare. I mean he does stomp on kaiju, so next time I watch a film I’ll get a closer look! The legs are short and stumpy, again all with those scales. The feet are very bland, just the usual claws, all in the same colour. I’m going to assume this is what it looks like in the film, as I can’t see them putting so much effort into everything else and then forgetting to add different colour here. 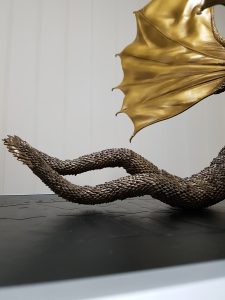 Tails – Last but not least you have the two tails. Again, these continue the theme of being covered in scales. They are in slightly different positions, but it a good natural pose.  I will say that the tails actually look like they are being moved/positioned by wires!

Size. Just because I forgot to mention this elsewhere, this is a 25cm model. So it’s pretty darn big! The wing span just makes this model so impressive, and so impractical to put somewhere!

Lastly, I want to mention that I was fortunate enough to pick up this model at the UK Kaiju Con. This was supplied by awesomecollector.com for a charity auction, and it’s only fair that I give them a shout out for being such amazing supporters of the UK fanbase. If you are looking to get an X-Plus for yourself, head over to the website, speak with Jason and let him know how much we appreciate him helping out us UK Kaiju fans!

Thanks for your time and if you have any questions or comments please leave them below.