You may have seen some of my previous reviews where I have stated I am not the model guy. This is still the case, however I am starting to amass a collection which will hopefully allow me to give you a better comparison between the various brands out there, although my knowledge regarding models is still very much as a newbie!

I have recorded myself opening up the box and having a look. So, should you just want to see how this model looks fresh out of the box and hear me ramble on about it (this is my first X-Plus and I don’t know when to stop talking) then please click here. 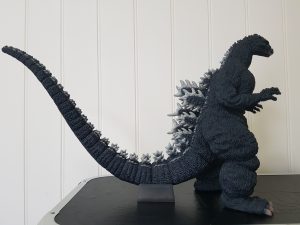 Ok, so first a little bit of background about how I got this item. As you are hopefully aware, the UK Kaiju team held the first ever UK Kaiju Convention in August 2018. At that con there was a charity auction with the biggest draws being a fantastic selection of X Plus models that were ever so kindly donated by Mr. Jason Welling from Awesome Collector, an online store which sells a variety of great kaiju related merchandise. I was super lucky to get not one, but two X-Plus figures at the con!

I also just want to take a moment to say what an amazingly generous act of gifting these models. I mean, this and 4 others were shipped from the States to us free, all so that we could raise money for a Action for Children. If you are interested in buying yourself an X-Plus model I would highly recommend using Jason. He’s proved himself as helpful and accommodating in the past to European customers, however this act of kindness has sealed the deal as to where my business is going in future!  Felt he deserved a shout out for this, and visit his store at : AWESOMECOLLECTOR.COM 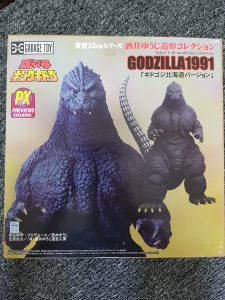 What initially caught my eye at the auction is this model was the only one with a detailed picture of what was in the box. All other X Plus models just had a black and white print of the creature, whilst this showed the model and touted the sculpt was by Yuji Sakai. So as I said earlier, I’m still not the model guy. So when I see this is by Yuji Sakai that means nothing to me. I’ve Googled the guy and not much actually comes up. My understanding is he does lots of sculpts of Godzilla, some from the films and some his own prototypes. His work appears to be quite highly regarded, which is why his name is on the packaging as a selling point that this sculpt is quite special. Please feel free to correct me or give further info in the comments below please.

Opening up the box reveals Godzilla in a plastic bag, with his tail separate and in two pieces and a little plastic block. This block is to support the tail, and the tail has to be put together an then attached to the main model. The packaging is quite a simple plastic that you’d expect with others, it’s the same as SHMA and NECA (although NECA isn’t in a box) but there was a lot more bags! Previously the plastic case was enough to preotect the model, but this guy has his hands and feet wrapped up in little plastic bags. This seemed a bit overkill as I can’t imagine these parts being damaged, or that these would add any protection if the box was crushed!

A few things struck me when I first got this model out (and if you watch the video I’ll probably be repeating these a fair bit). 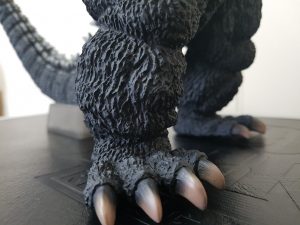 Firstly, this expensive model has a few bits to be attached. Now with the size of it, and to avoid damage in transit this makes sense. However, I was completely thrown when the instructions told me I need a hair dryer! I know this much be the norm for model collections, but it just made me laugh as I’ve never seen that before. You have to warm up the tail, so that it’s joining bit is all squishy and then stick it in. Feeling the model be so squishy was ever so strange, and it was still a job trying to get it in. I imagined these things would just click into place, but it certainly was an experience! I’m not sure the extent of what other models require you to do, and I’m sure once you’ve got the knack it’ll be fine. But for anyone new to the scene like myself, this is a heads up for you! 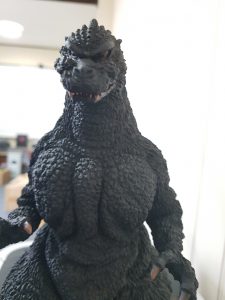 Secondly, this model is super light. It’s 30 cm and seems to weigh the same as the 15 cm SHMA model. This is because SHMA are solid plastic, while X-Plus are hollow vinyl. So if it gets hot, you could warp  theoretically the model, or at least it’s soft enough to press in where he’s hollow.

My understanding is that some people actually do this deliberately to alter the pose slightly, and is also a concern that some models’ pose could change if kept somewhere hot. If any of you reading this have had experience of planned or unplanned X-Plus warping please share below! It’d be really interesting to hear about. In one way, having a lighter model is of course great because it’s easier to carry, but it came as a surprise to me that these highly coveted models could suffer if left in decent heat. I’m sure it’s not a major concern, or they would manufacturer them differently – but just be aware that when you pick up the box it will be quite light! 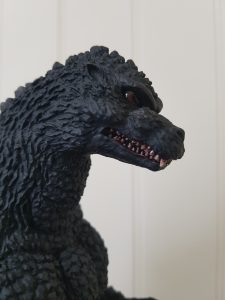 Third and finally; he is gorgeous. I don’t necessarily think it’s extra detail due to being a Yuji Sakai sculpt, I think this is reason why everyone raves about X-Plus. This model could be mistaken as a miniature used for the film if I had a diorama to stick him in!

He looks mean, like he’s in an old western stand off. There’s no roar, no fighting pose, he is just staring menacingly. Unlike the other model brands of NECA and SHMA, this pose is all you can have. His head, arms, legs etc will not move. Personally, this is the biggest downside to X Plus, but also the reason why they can focus so much on detail. The SHMA will have big gaps where you are able to move the ball joints around, and obviously this means that they will be noticeable. It’s not that I really change the pose of my existing models, it’s just nice having the ability to do so, or the fact you can find that perfect pose. Looking online, I can see that some suits have multiple releases and some poses are desired more than others for this reason.

All in all, I’m ecstatic with my purchase. I understand why these models carry such a premium, but it’s going to be down to the individual model as to if I’d chose X-Plus again. It’s not just the cost, or the pose, but also the size! At 30cm you need a good bit of shelf space if you are going to start collecting these bad boys!