Alright! In our first interview with a star from The Monsterverse – we sit down with Mr. Alan Maxson who plays King Ghirorah‘s right head.

I  (Joe) was lucky enough to sit and ask him question’s to my heart’s content. Unfortunately, not all of the answers to my questions can be shared at this time (pre- film) but what Alan could share, he kindly does with us below.

Hi There Alan, so not all of our readers may immediately recognise you, of course this is understandable given your amount of work behind a mask. How about telling us a little bit about yourself so we can get to know you a bit? 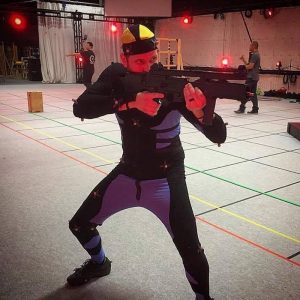 Did any veteran Toho actors or employees come on set to pass along knowledge?

Having Michael Dougherty directing us was like having every Toho actor that ever existed with us.
He knows the Godzilla franchise so well. He is truly a fan and the best choice for this film!
That’s awesome that they are hiring real fans and not just directors that have done research. A lot of true fans will be glad to know that someone who understands the films and appreciates the genre is at the helm.
Totally. Couldn’t be in better hands.
So Ghidorah has three heads, and the studio went with a specific actor for each head. Aside from
reflecting different personalities authentically, I am sure that there is a deeper reasoning behind
this. Is one head more dominant? Is one more aggressive? Do they all get along? What can you
tell us?
You will just have to wait and see the movie to figure this one out.
At the risk of sounding spoilerish…that’s a yes (laughs)!
Were you shown what Ghidorah looks like? What was your reaction?
He’s big! Ha!
Has life changed since you have been cast in this role? Is there anything upcoming we can see
you in?
Life has changed on social media more than anything. Lots of fans! And I love when they all
reach out, it’s super fun to hear what they have to say. I’ve had a number of people approach me
for autographs and take pictures with me. That’s super fun! I had one awesome fan who had me
sign his Ghidorah figure that he had since he was 6! I was so honored. You can actually see me in a number of things coming out. I’m always working, I suggest

following me on social media for updates. But one show currently airing is AMC Visionaries: Eli Roth’s History of Horror. I play a zombie for a very, very quick second in the opening title sequence of every episode. So that’s fun!

What would your dream role be (after you have been literally the biggest bad guy ever on
screen)? Why is this?
I have two dream roles. I am a die-hard fan of Planet of the Apes and Star Wars. I would absolutely be over the moon to be in both of those!
If you could single out one actor who you look up to, who would it be? What performance of theirs
did you find most inspiring?
I don’t know if I have a particular one that I look up to for performance. Many actors inspire me
whenever I see great performances come out of them. I’m not in the same category as Jim
Carrey but I sure to look up to him. I love Jim Carrey movies, he is extremely talented!
What question has no person asked you yet that you are dying to answer? Why is that?
Wow that’s a tough question! I don’t really know. Let me turn this around on all of your readers.
What question do you all want to ask me? I’m on Twitter, ask me anything! I’ll answer if I can!
And finally….the million pound question: Who do you favour to win in 2020: Godzilla or Kong?
I want the movie to win! More sequels and more monsters!
That answer is only acceptable because I agree with your logic (laughs)!
If you want to tweet Alan as he suggested in the article above, or want to check out some of his other work,  here are the ways to get a hold of him:
If you want to follow on social media his handle is @Monster_Maxson on both Twitter &
Instagram.
His website: www.MonsterMaxson.com
And, if you happen to be someone who directs or is affiliated with Star Wars or Planet of the Apes projects- we give Alan a solid recommendation.