“I may not know art, but I know what I like”, I don’t remember where I heard that, or if it’s more of a saying than a quote, but I can tell you that it applies to me and models. Yes, that’s right, I am NOT a model guy. I hold my hand up and admit that models aren’t usually something I’m in to. I have a couple of die cast models from Final Wars, and a NECA Godzilla, so I’m hardly an expert. It’s usually a case of if I see something I really like, then I’ll get it. I might not know the brand or anything, but if it appeals to me then I will grab it. 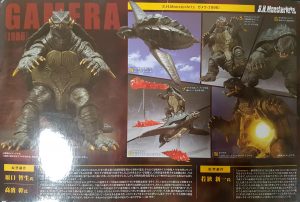 So, this brings me to a new purchase. S H Monster Arts Gamera 1996. This is my first time purchasing, or even seeing a Monster Arts model in person. My understanding (and this is a very basic Google and what I’ve seen understanding) is that NECA give you a posable model that’s got some decent detail, is very sturdy and affordable at approx. £20. It’s basically an action figure that you would play with, but it’s decent enough that you could display it. Next up comes S H Monster Arts who are a lot more expensive, with prices starting at £70ish, however they come with a higher level of detail. These you would want to display and probably not play with. Due to the multiple poses and good detail I imagine these are ideal for dioramas. Finally, we have X-Plus, the crown jewel of models. These are extremely high detailed, and you’ll be paying for that at £150+. These look like the actual films, but are in a set pose, so you better like what you are buying!

With all that out of the way, lets move on to the reason you are here, my review of the Gamera 1996 model. 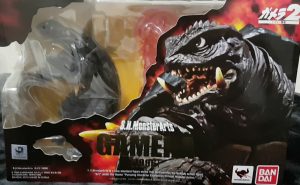 First of all, the box. It looks very nice, I like the gold writing for the name, I like all the different poses shown on the back, and I got a little excited at the possibility of his chest lighting up as that’s what it looks like. False advertising I’d say there as I found no battery or switch! It’s all in Japanese so I have no idea what all the texts says, and the see-through part shows off Gamera but doesn’t look overly impressive through all the layers of plastic. 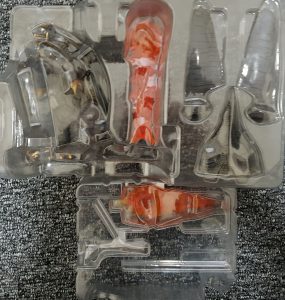 Opening the box up and this thing is really well packaged!

We have Gamera as a main model on the left hand side with the flame next to him. On the right hand side we find the flying parts. These are in the plastic packaging, with another layer of packaging on top to keep him in place. Underneath this packaging sandwich you have a little section tucked in the corner under the flying parts that holds the fire effect and support for if you want him to be flying.

There are instructions for how to change all his different parts, and yes, it’s all in Japanese, but you can see the pictures to know what to do. It’s well packaged, looks nice and has clear (considering it’s in Japanese) instructions. So far, so good. 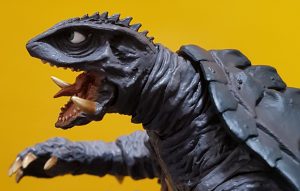 Let’s take the model out and have a look…Gamera, in his basic model state. As I said earlier, I’ve never seen a S H Monster Arts model in person before (or X-Plus for that matter) and my initial reaction is pretty much WOW! The NECA was cool and all, but this is another level. It just looks awesome! It almost makes me want to build a city so I can put him in a diorama to display him, but I’m not that creative. This guy can be moved every which way. His arms, his legs, his head, even his tongue can be moved. At first I was a bit scared of moving things, like it might snap off of something, then I remembered you can swap parts and yank his arms off so I got brave and moved him all over the place. Whatever I wanted, he seemed to be able to handle. Such a versatile model, and lots of fun trying to get a picture to show him off to people. 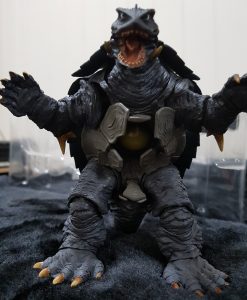 So, lets get this out of the way, the biggest disappointment of this model. You see the picture on the box, the one of this chest open and a glowing coming from within as if he is charging up for an attack, well that must be photoshopped! Firstly, trying to open the chest to just match the image on the back felt nigh on impossible, they are such fiddly little pieces and one kept popping off. I really wasn’t comfortable bending these back, and none seemed to move far back enough to display the yellow orb in his chest…not that it really matters as it doesn’t glow, it’s not even bright. This is just a dull yellow orb in his belly. Now it is hollow behind this, so I’m sure some bright person could pop some LEDs behind there and it would look damn good, but that’s extra work and would still have the issue of the fiddly chest pieces. I’m going to say I won’t be using this at all but would love to see what other people what done with this. It’s a nice idea, but poorly executed as far as I’m concerned. 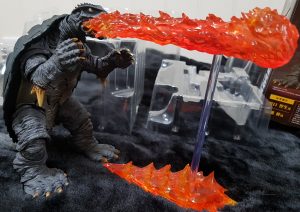 This is basically Gamera as standard, but you can insert a fire ball coming out of his mouth, along with a flame along the floor. The fire ball is a good length, it’s a ball at the end, with the rest of the length just being a flame effect. Whilst the flame on the floor is reasonably flat and jagged, just emphasising the power of the fire ball. Both are the same colour and quite bright. Again, I’d love to see what someone could do with this using some lights to really bring it to life. You just know someone out there must have a Godzilla model and they’ve got the dream battle going on of Godzilla’s atomic blast v Gamera Fire ball! It’s a simple, but effective add on to the model that really looks the part. 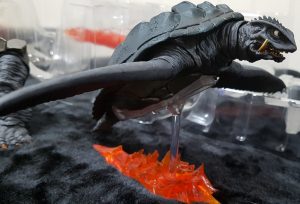 That’s right. You can change Gamera so he looks to be soaring through the sky. Now this isn’t where he goes full turtle and is just a shell spinning through the air like a UFO (which is a shame as I always thought that was really cool!), it’s Gamera with his arms like wings and no legs. So, for this model you take off his arms and replace them with ‘wings’. These are static, no joints to move. But you can still tilt them up and down on the main ball joint. This is all you’d expect and I do like the detail of his little claws at the end of each arm. His legs come off together, and you slot on a new bottom section that again has nothing to move. This is a little tail and two little jets where his legs would be. Again, you wouldn’t really expect there to be anything poseable her, and I really appreciate the level of detail, considering when you put this on the plastic frame to hold him up a lot of the detail isn’t being shown off. Because I’m not a huge fan of him flying around in the films like this I wasn’t expecting to like it, but here I am really liking how this looks. It’s great that I’ve been surprised at how good he looks like this, though I’m not sure this is how I will choose to display him. 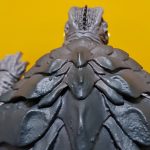 There you have it. The many different varieties of S H Monsters Arts Gamera.

Obviously there are countless different ways you could pose this figure, and if you have others he could interact with, or a diorama to put him in then it will only get better. I paid £62 for this, and I am very happy with my purchase. This could be the start of a new collection!

If you want to want to see more of this figure I did record a video opening him up which will give you an even better view. To view it, just click this link https://www.youtube.com/watch?v=pBKiGlnd9ZE