If you read my first SH Monster Arts review (Gamera 1996) you’ll remember that I am not ‘the model guy’. I don’t have the knowledge or passion of many kaiju enthusiasts out there. However, I do love Godzilla, and thought it would be cool to get a model with higher quality than my NES and Radioactive NECAs. I came across this on eBay for £40 and couldn’t resist picking it up. The auction wasn’t labelled with which version, but after a bit of research on the SHMA website I believe this is Godzilla (1994). If that’s correct, then this was originally released in 2011, and then re-issued in 2012. Sale price of $68. Interestingly, the first edition came with a blue atomic ray/atomic ray stand. This little addition would have made all the difference to me! 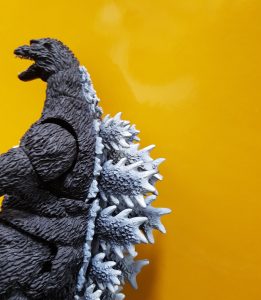 Before we get into the review. Here is the blur from the website. “Introducing a revolutionary new Monster Action series S.H.MonsterArts! The S.H.MonsterArts series is based on the below points: Point 1) Sculpt: rendered by the renowned Yuji Sakai and featuring unprecedented detail Point 2) Articulation: Godzilla will feature 29 points of articulation. All figures in this series will achieve never before seen range of movement. Point 3) Features unprecedented levels of detail and coloring. Figures will capture fine points such as the eye pupils and back plates. Superior articulation allows for depiction of Godzilla as seen swimming underwater! Figure constructed with ABS, PVC and POM materials for enhanced detail. Bonus effect parts and special display stand for effect parts included in first production wave only!”

So on with the review…

I’ve had a bit of time to enjoy this model, but if you are curious my initial reactions you can watch my video impressions (link at the end of this review), and I’m pleased to say this is a sweet looking model.

Firstly, the box is tidy with a premium feel and a nice display of the different poses on the back. The packaging is simple and it’s just Godzilla all in one piece with no accessories. 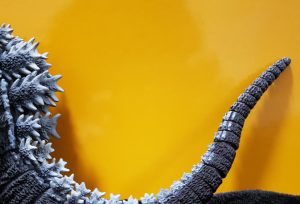 One you get him out of the box the first thing that comes to my attention is his tail. It’s so long, so posable, and is exactly what I wanted to see for this figure.

Overall the body, arms and legs are all simple, yet detailed and mildly posable. I do like his craws on hands and feet, nothing overly special but they just look good! His legs are so chunky that he can’t really do much other than stand straight. The arms and hands are much better, but still struggle to pull off much of a range. When they say there are 29 points of articulation I think that’s mainly the head and tail!

So let’s look at the head. This is one mean looking Godzilla! His eyes and teeth are all well painted and he looks ready to fight. The movement here is really good with head, neck and jaw all posable in anyway I want. I can’t help but compare to Gamera here as he had a tongue which you could move, and it’s little details like that which can really add to a product. I know none have eyes which you can change, but I do think that would be a great addition to the SHMA line, having him able to look in a particular direction would be neat. 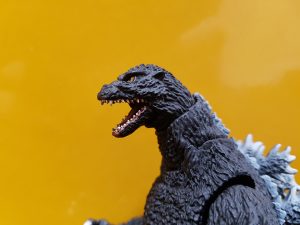 Oh and let’s also quickly mention the spines. They don’t move at all, and I’m sure you wouldn’t expect them too, but they do look good.

Closing thoughts. This isn’t a great model. The limited pose means you couldn’t really do much in a diorama or have him battling another SHMA figure with ease. The fact it doesn’t come with any effects is a real let down as when I think of Godzilla, I think atomic breath.

However, it is a good model. The detail and quality are high, he looks menacing and on his own or in a row of other models he looks the part. At £40 I really cannot complain, and as I don’t do dioramas it’s not a major issue that I can’t pose him in many different ways. For any potential buyers though it is worth mentioning. If I could have got the initial release with the atomic breath then I would be completely satisfied, as it stands I’m just happy. The problem here is because I got Gamera first and that came with a whole slew of extras that really set the bar high!

As mentioned earlier I also recorded my initial reactions as I opened up my purchase and you can view that video here https://www.youtube.com/watch?v=jo6-tCjE-90&feature=youtu.be. This will also give you a much better view of the model 😊

Thanks for reading/watching! Please comment below with any thoughts/questions. 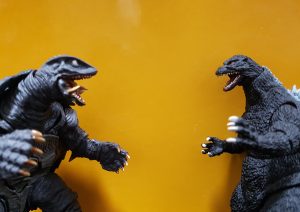