Exciting blurb below, followed by my review…

The ultimate chase between monstrous evil and Earth’s last guardians in a dark world of the distant future.

A desperate military leader has found the tomb of a malevolent creature thought lost to time — Supayra, the last destroyer. Accepting the mission to stop their attempt to harness its power is Alawa, human host of the giant bear goddess Mokwa. Ruthless adversaries always a step ahead and unimaginable horror abound, a relentless chase for survival begins with only one ally left to help. Can Allie and Mokwa prevail in the race for the Lifesblood of the Earth?

Back in the day when I was a young lad I loved to read. Roald Dahl really captured my imagination and I found myself read his stories over and over again. Growing into a teenager I turned to things like the Point Horror collection of stories. By the time I was an adult, I had lost all interest in books. I might read one if I loved a film one was based on, but that was about it.

Flash forward to the present and I still have no interest in reading. It’s not that I don’t like books, but with so much content available to me in the world of TV and gaming that give me much quicker gratification I don’t make time to read a book. In fact the last book I read was Ready Player One when everyone raved about it some 4 or 5 years ago! 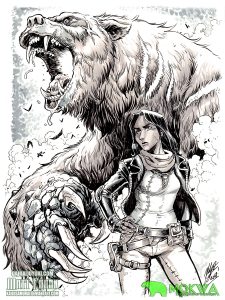 Raffael Coronelli, the writer of this book popped a post on the UK Kaiju Facebook group page saying his latest book was on sale at 99p. To be honest I just wanted to be nice and buy this to give the guy some money for putting effort into something I’m passionate about. I was pretty sure that I wasn’t going to take the time to actually read the whole thing. I had hoped it was a graphic novel to flick through, but sadly not. I didn’t read any reviews, the blurb I stuck at the top of this review…nothing. It was just a purchase to show goodwill. Then Joe (that’s right, I’m pointing the finger at you if you’re reading this!), one of the group admins suggested I write a review for the new website. Not wanted to seem rude or let on this Raffael that I wasn’t really that interesting in his work I of course gave a positive “Great idea”. Later that week I started the book…I got about 3 pages in then stopped. Maybe it’s that films have accustomed me to an exciting start to get you going, but I just couldn’t get into it. I tried a few days later and maybe read a few more pages, but again, nothing grabbed my attention. My opinion at this point was it was colourfully descriptive but was lacking an exciting story. A young girl who has to save the world with her kaiju friend. Just seemed a little silly, something more for a Saturday afternoon cartoon that’s going to have a paper-thin story and a likely outcome.

Skip forward about a month and my wife went into hospital for the birth of our second child. I decided to take this with me as a bit of homework to pass the time! I roughly remembered what had happened in the opening and got stuck in, after a good 20 – 30 minutes I found myself enjoying the story. The kaiju itself wasn’t really impressing me, but I found the character quite interesting and I wanted to see what this ultimate evil was. The writing was still very descriptive and the character interaction was solid. I’m not sure what point it turned, but perhaps a quarter or third of the way through it got dark, like out of nowhere it became graphic and violent. This was no longer a colourful Saturday morning cartoon, this was now an anime. My interest was suddenly perked, I created a much more vivid picture in my mind of the character and world around her. Perhaps that says something about me that blood and death got my attention, but maybe when you have kids and end up watching their cartoons I couldn’t help but imagine this in that vein, once it distinguished itself as something darker and turned into an ‘anime’ my imagine was free! Hope that metaphor makes sense!!

Now I’m really into it, I was reading the book in half an hour chunks throughout the day finding out more about this world, reading the battles the kaiju faced and what this ultimate evil was (I feel I should mention that my wife wasn’t in labour at this point, she was brought in to be induced and that didn’t happen for 21 hours after we arrived). The kaiju who was going to bring about the apocalypse was a very interesting design, and there were some cool characters met along the way. It had drama and comedy sprinkled throughout, the whole book was a really good read. I just had to be in the right mindset…no distractions from TV also helped! I will say that I found the ending a bit of a disappointment. The way it built up to this final battle and then ended rather abruptly. It reminded me of Gamera: Guardian of the Universe, you know how he battles throughout the whole film, then in the climactic battle at the end it’s just one fire ball that hits him and kills him. 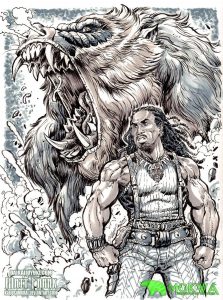 as just dropped in sometimes, the way it talked about other characters but not really giving me much of a back story. After reading it I discovered this is the third book in the series! Whilst more of a spin off, it certainly explained why I should have known about a particular character who was referenced throughout. Also, once I got to the end there is art work my none other than Matt Frank, which I’ve scattered on this page…and his illustrations are nothing like what I had conjured up in my head. It would be interesting to hear if other have done the same, and what they imagine the characters looking like. If I had any artistic bones in me I’d draw it, but I don’t so won’t submit you to stick people 🙂 When reading I preferred having my own style for the characters in books anyway, makes it feel more personalised.

In summary, I did enjoy the book. Make sure you have at least 30 minutes at the start so you can sink your teeth into the story. The ending I found the main shortfall, but the journey to get there was very enjoyable. If you can, read the other books as I’m sure this will add to the back story further. I’ll give it a thumbs up, as I don’t want to give scores. If you do care about that type of thing it has a 5 star rating on Amazon based on 4 reviews.