Have you heard of 100FT Robot Golf? It’s a PlayStation 4 game that’s PSVR compatible. You control one of a selection of giant robots, playing golf in various cities. But unlike normal golf (I know this doesn’t sound normal anyway!) your opponents are playing at the same time as you. No taking it in turns, so you have to hit the ball as quickly and accurately as possible. You can also ‘battle’ the other robots to put them off taking their shot, and if a building is blocking your shot then just shoot it down with a laser. There’s a wacky story to go with it too, but I’ve only played briefly

so can’t comment too much. It’s a quirky little indie game that looks to be a bit of fun. 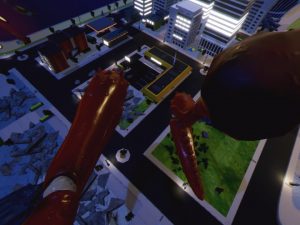 Be a giant kaiju in a city

Now, as free DLC you can get the PSVR exclusive Kaiju Driving Range. It turns out this is a multiplayer only level, with no AI option. One player is the robot using the dualshock 4, the other player is the kaiju with two move controllers.

Your robot cannot move or anything in this mode, he just aims and shoots the ball. He can either hit the kaiju, or shoot the ball through a selection of moving hoops.

The kaiju can pick up and throw buildings, side step from left to right and grab anything within range.

At the bottom centre of the screen is a points meter. Whoever has the most points by the end of the round wins. It’s that simple, but it’s not that fun… 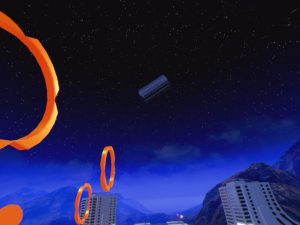 As I said the robot can only hit golf balls, and you are playing on the TV using the controller. Unlike the main game you cannot use lasers, or rocket boosters or even move. I guess this makes sense as a golf game, otherwise you would fly over to the kaiju and just starting fighting (though that sounds quite fun!)

As the kaiju you are now in VR, so for this you have the move controllers. Each one controls an arm, using the trigger to open and close your claws for picking things up and the move button to side step left or right. If the robot shoots a ball at you, there is the option to deflect it with a well-aimed swing of your claws. Picking up and throwing a building is ridiculous and it just spins up in to the air. 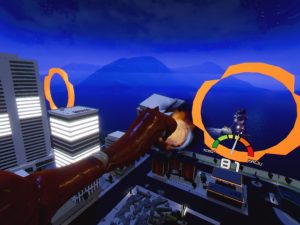 The meter in the middle shows who is winning

It’s clear this is a budget game, and it’s a nice idea having one player on tv and the other in the VR, but sadly it just isn’t that fun. The main game is already fully playable in VR, and I think just having some unlockable kaiju would have been better. ‘A’ for effort to the developers, but don’t waste your money on just this mode, buy it for the full game. It’s on the PSN for £15.99, I picked it up on sale because it sounded novel and I wanted to play as a kaiju.

I’m also sorry to say that you cannot capture footage of this on the PS4. I’m guessing this is due to the fact the mode is using both the tv and headset to display different images. I have however captured these screenshots scattered through the review, and my video review (which you can watch here) shows these same shots, along with footage of the main game so you get an idea of the visuals.

Thanks for reading. Please leave your comments and questions below and I’ll get back to you. 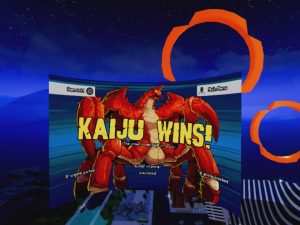