Fortunately or unfortunately depending on your own opinions I grew up without a gaming console. I would like to point out that they have been available the whole time I have been alive and I am not that old…yet.  Great for me though that by the time I had developed a taste for games when I could actually afford to buy them and appreciate a game for being a fun game and not just be gobsmacked by graphics.

So while in college/university my friend Anthony offered me a Super Nintendo for $20. That was a quick yes and off I went procuring the games I had always wanted to play…Death of Superman, Primal Rage and Super Godzilla to name a few. I love the Super Nintendo. The graphic are fantastic in a nostalgic way, and the system is built like a tank.

Primal Rage was admittedly my first play on the console, I had fond memories of going to arcades and dropping many a coin on that game as my two favourite characters Sauron and Talon. But it would be Super Godzilla that really got my friends and I into playing this retro system, and we all had a blast beating the game and seeing where the wild plot was going.

The game itself starts off  pretty predictably for a Godzilla game, a monster attacks Osaka and our human heroes need to find a was to thwart the attacker. The combination of the Super X 2 and a special machine to control Godzilla quickly becomes the best option (because WHY NOT). Thus why we are playing as Godzilla and not a member of a human team. What was surprising is that your level one boss is King Ghidorah, who is normally reserved for end game or advanced scenarios considering how powerful the monster is.

Ghidorah is subsequently  defeated…and shocker – aliens appear to collect him. From here the story becomes an interesting mash up between Showa and Heisei film series. Bear in mind, that neither Godzilla vs. Space Godzilla or Godzilla vs. Destroyah films had come out upon the time of this games release, so it contains a unique plot line and climax.

You can watch a complete play through of the game by clicking here.

So if you watched, or skipped through the play through I have posted above, you will note that the game basically follows a pattern in all of its levels: plot point, complete maze to gather resources, and a level concludes with a massive monster brawl.

As I already explained before, the plot points of this game occur at the beginning of each level and essentially progress you towards the climax. What is interesting, again, is that the plot of this game contains elements of both Showa and Heisei movie series. For example, many of the monsters in this game are from the Heisei run of films – with the notable exception of Mecha Godzilla who is Showa themed in the North American Release, and Heisei in the Japanese release. The final boss Bagan, being a wholey original creation for this game, and we will get to him in a bit.

The story itself follows a very Showa-esque plot which is a load of fun when combined with the updated or original Heisei monster designs. The aliens using monsters to take over the world was a frequently used Showa plot, and funnily enough pretty much every Godzilla game includes a malevolent alien race as its main antagonists, so in the end – what’s a Godzilla game without a few (a lot) of aliens?!

The mazes are really just open areas, but I am going to call them mazes, because there are obstacles you must navigate around, traps and power-ups found throughout the pathways that you are supposed to take. Now if you read that last sentence, you will notice that I ended it with supposed to take. This is Godzilla we are talking about. By sacrificing a little energy (which is crucial during battles) you can bulldoze your way through any obstacle or step on any tank etc that you have grown tired of looking at. I feel like this is a nice touch, as it adds a bit of player freedom, and it also makes the levels less monotonous for people that like to plough through rather than level grinders like myself.

The monster brawls are what people come to this game for. The 16 bit monster smashing battles are quasi turn based, and actually resemble what would later be used in the Poke’mon games.

Each boss battle takes place with a different kaiju, and the game mechanic is as far as I know, unique. The battles are not quite turn based, relying instead on player timing and play style to dictate how many attacks are done consecutively. The timing coincides with a bar that is just below the main battle image (screenshot below). Based on how far across the screen your battle bar has gone, you can either use a standard physical attack – or use a special attack. The special attacks are also reliant on player timing – there is no special combination of buttons needed when using them. Instead, you have to watch the box below the battle bar/ in between the two monsters’ stats. When it opens you can use the attack pictured provided you select it.

Every special move comes with an awesome animation – again similar to what would be used in Poke’mon, however the retro art in this 16 bit game is really fantastic and showcases just how much love went into this game. Below is an example from the boss fight from Ghidorah. Those gravity beams are rough…

Now, let’s get down to brass tax here. This game is famous in the fan community for two reasons. Super Godzilla, and Bagan. Now if you haven’t heard of this game before, that is unfortunate, but let me just be the first to tell you in that case…Super Godzilla isn’t just a play on words because this game is for Super Nintendo/Famicom (same system just different names for different regions) – there is actually a Super Godzilla.

Feast your eyes on this:

Now of course those pesky human underdogs are behind Super Godzilla, who is our classic kaiju hero combined with Ghidorah DNA. You do not wanna mess with that. But then, what would encourage them to do such a thing? What on Earth could their reasoning be for doing this?

Meet Bagan. Quite possibly the best boss kaiju ever created.

Bagan is a beast. And when I say “Beast” I mean BEAST. If you walk into the final boss fight thinking a Godzilla-Ghidorah hybrid will be enough…you’d be wrong. You have to save up every scrap of energy and every power-up you can get to have a shot at taking this guy down. He is the aliens’ ace in the hole, and he delivers more than Monster X ever could. He is bigger than Biollante, has Godzilla and Ghidorah DNA, and of course…is controlled by malicious, sentient aliens.

Bagan is actually a bit of an interesting story as a character design, as is Super Godzilla. Both were based on concept art at the time for Heisei films. Originally Toho toyed with the idea of having Bagan being a shape shifting monster, but that was scrapped. Later on a Mothra vs Bagan film was pitched, but it never materialised.  Super Godzilla however, became the blueprint for what would later become Space Godzilla in the Heisei films. But this is getting a bit off topic…

In the end, if you prevail against Bagan, the aliens are defeated and Godzilla reverts back to his original form. The Super X 2 is seen taking out the alien space ship, and Godzilla wades off into the sunset just like in a Show era movie.

So the consensus from me? Play it – buy it. I just scoped out a few on Ebay and at the time of this writing you can pick it up for £5-10 (perhaps less in the USA). Assuming you have the Super Nintendo or an adaptor for the Famicom it is easy enough to play this game in the modern age. You will however need an RCA to HDMI converter (not terribly expensive honestly) to get this up on a modern flat screen television or see it via a projector.

Here is the link for Amazon UK to buy a RCA to HDMI adaptor.

Here is the link for a SNES to Super Famicom adapter.

If you can manage all of this, it is a game that is unique in its own ways, does a lot of fan service, and is a must have for any Godzilla fan. It has not been re-released as of this time, and for that reason, it is definitely worth picking up.

I’ll leave you with some retro bot art: 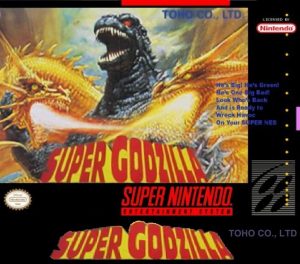 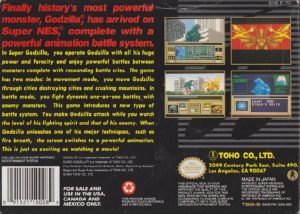 Till the next time kaiju fans!!