Have you seen that episode of The Simpsons where the game ‘Bone Storm’ is released? Milhouse says “This is great! And all I’ve done is enter my name”. That’s how I felt with this title booting up.

An in-game graphic 3D Godzilla walks towards the screen with the Godzilla theme by Ifukube playing. He gets up close, opens his mouth and the blue atomic breath fills the screen. It’s short, it’s basic, but it gets me in the mood for Godzilla.

Now let me digress for a bit. I remember 1998, it was a simpler time. I was living at home and attending school, the internet wasn’t really a big thing (at least not in our house, and 20 years ago it wouldn’t have been great for videos) so all my gaming news came from the monthly magazines. I remember seeing screenshots for Godzilla Generations, and it looked awesome! For context the PS2 was still a few years out, but the PS1 and N64 would have been out, so a 3D Godzilla game back then got me very excited. The previews might not have been that excited about the game, but I was a hardcore fan. The USA gave us (for better or worse) a big budget Godzilla film. Plus, this was a Godzilla game on a next gen console! I had a lot to be happy about. We had a local gaming shop that actually had an import Dreamcast, but it was way out of my price range on a paperboy wage. I won’t drag this out anymore, but feel free to get in touch to reminisce as it’s one of my favourite consoles 😊 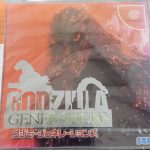 So here we are. 20 years after its original release, and I’m openi 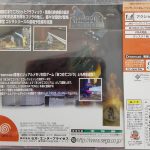 ng up my sealed copy of Godzilla Generations. It’s crazy to think this game has sat sealed for 20 years, it’s almost a shame to open it.

The case itself is beautiful, with a menacing Godzilla on a dark orange background and the stylish silver Godzilla Generations logo. The back shows 3 game imagines. One of Godzilla, one of Mecha-Godzilla and a final one of a chibi Godzilla.

It boasts 1 – 4 players and VGA compatibility on this GD-ROM! How technology has move on!

Inside are some leaflets –

Sadly I can’t read a word of Japanese, so none of this makes sense. Still, it’s nice to look at all the pictures. 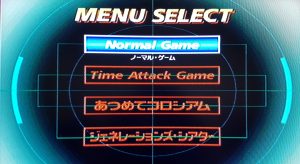 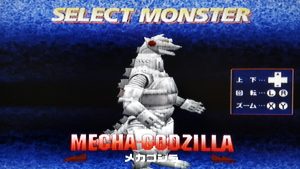 The main game allows you to chose from either Godzilla or Mecha-Godzilla at first. Once you’ve selected your character you’ll start on the first of the 11 stages. Each stage has you destroying as much of the city as possible in 10 or so minutes. Should you manage to destroy all buildings then the level will end, but I only managed that on one level. Walking right into a building will take off a bit of health, but hitting it with your tail doesn’t seem to hurt you. There will be military on land and air trying to stop you. If you are shot you’ll roar and be unable to move for a few seconds, but the damage isn’t massive, it’s more the frustration of a tank making you stop in your tracks. Flying targets are very difficult to hit with your breath, so I normally wait for them to accidentally fly into me! As a character you are quite limited with 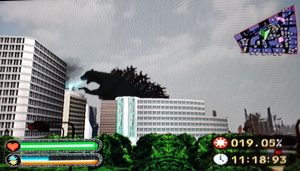 moves. Red breath, blue breath, swing tail left, swing tail right are your attacks. Should you be getting low on health just press the roar button and you’ll fill your health meter up a bit, do it 2 or 3 times and you’re pretty much fully healed.

Gameplay here is very basic. Trample as much of city before the time runs out. There are no boss battles, no kaiju to stand in your way. You just walk over things. Which is fun for a while, but the novelty soon wears off. There were so many times I got to 99% of the city destroyed, but couldn’t find the bit I missed. So I just sat around or slowly walked about the level in the hopes I could accidently smash something. This was the worst part of the game. There is a mini map in the corner that highlights where big buildings and military are, but once you’ve destroyed the main stuff it looks clear. Perhaps I missed a tree or something, but it’s not easy to find and so I’m just left bored. As you can see in the screenshots, time and time again I was so close to 100%, the map is clear. All I can do is sit and wait for the timer to run out. This is not fun, this is painful! I think they either need to let you reach an exit for the level, or show on the map where you need to go.

Being an older 3D game you have the dreaded camera issues. You can’t control the camera (part of the reason why it’s hard to find something to be destroyed) and it doesn’t follow you as such, it’s in fixed locations. Sometimes this makes for some cool cinematic moments, other times it makes it impossible to see what you are actually destroying.

Music in this game is really good, but it does just repeat. Feels like they’ve taken a really cool score from a film, but the music will wind down and then the track starts again. The sound effects are quite basic, a stomp for every footstep and the crash of a building. 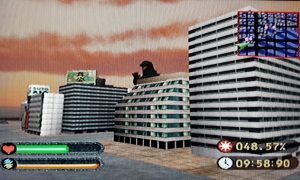 Maybe 20 years ago this would have come across better, but playing at it now I couldn’t recommend it to anyone other than a hardcore Godzilla fan. Even then I can’t imagine you would play this for more than a few hours. As there are 11 levels at about 10-15 minutes you can complete the whole game in about 2 hours.

Once you’ve completed the game as Godzilla you unlock 1st (1954) Godzilla. Complete it with him to unlock Zilla, followed by Minilla followed finally by a Giant Dr. Serezawa. Each character has different attacks as you’d expect, but they do the same thing i.e. Zilla breathes what looks like wind, Minilla blows smoke rings but it all does damage just like Godzillas atomic breath. I played through to unlock 1st Godzilla, then again to play as Zilla. Zilla has such a long stride he is quicker to get round the map, but also even harder to control. I couldn’t bring myself to play anymore, but I don’t feel like I’m missing much.

In the time attack mode you cause as much damage as possible in a set amount of time. This doesn’t unlock any extras, and it certainly doesn’t fix the controls or camera. This could be fun with friends as you pass the controller taking it in turns to do the most destruction.

This is the multiplayer mode advertised on the case. You can raise a chibi kaiju on your VMU and then battle it out with friends. VMU is the Dreamcast Memory Card, or Visual Memory Unit. It has a screen and buttons allowing you to play basic games on the go, 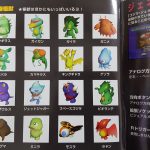 in this case it was a Tamagotchi style mini game that would then allow you to play with your little pet on the big screen. But wait, in order to play this you need the special Godzilla VMU, the standard ones I have aren’t compatible *sigh*, so the multiplayer mode is locked out to me…until I find one on eBay, but I’m not convinced that would be worth the time or money at this point.

Now this is cool. How about a collection of Godzilla movie trailers all on one disc! You can unlock more the more you play the game!! This is a fantastic idea, especially as this is right around the time video was being put on disc…remember VCD’s?

So what can I say to sum this up. The game is highly flawed, but could keep you entertained for a short period of time if you are a big Godzilla and gaming fan. Maybe I was too excited, I had waited 20 years to play this, and we all know very few games (especially early 3D) hold up against the test of time.

Did anyone play this when it first released, and if so what were your impressions back then? 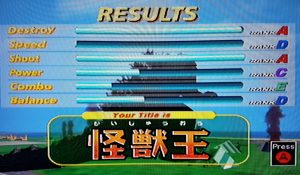 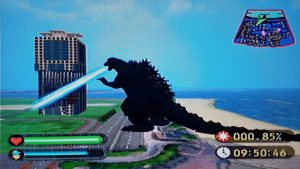