After almost 5 months it gives me immense satisfaction to mark the summer holidays with my first review. Everyone has been patiently waiting for more content from myself, soI dug out my trading cards for this article as let’s face it trading cards don’t get as much attention as they deserve.

I actually landed this gem of a set, back in 2014 shortly before my first child arrived. Around 2013 I had a revival of my interest in this fandom as I couldn’t escape the enthusiasm of the 2014 Legendary Godzilla movie that was round the corner. Watching my old favourite Toho movies from the 70s Showa Era (yeah the cheesy years) encouraged me to start buying merchandise and my wife secretly bought this from Ebay. I moved a lot of times the next few years and lost the set twice under piles of books. Now in my current home they are better looked after and immortalised in card holder wallets. Here’s the review. 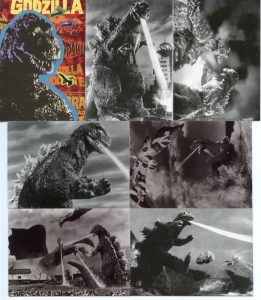 These are not easy to come by anymore and actually get sold individually or in groups of 2 or 3 which is heresy as people are splitting full sets up.

Card Content- Filmography: These 63 cards cover the Godzilla films from the original Gojira 1954 right through to Godzilla Final Wars 2004, including the fan favourite America 1998 Godzilla. Card 1 is more a front cover. Cards 2-30 are easily the most worthwhile as they depict the 29 movies which had been released so far at the time of these being manufactured in 2006. Each movie gets its own black and white, or colour snapshot of a scene with the reverse side offering a short paragraph synopsis. So basically half of the deck are movie specific.

Card Content- Friends and Foes: Cards 30-38 sound better than they are with the deck basically doing some padding out. Anguirus, Mothra and Mechagodzilla get their own cards in addition to less well known kaiju such as Varan and Baragon which was appreciated as entries. In the same format as the filmography cards the reverse side of these cards gives a paragraph of info about the friends and foes including example film entries.

Card Content- Origins Classified: Cards 39- 44 expands on the previous set giving a variety of kaiju their own character cards but it isn’t fully clear why they chose a different name for these. My only guess is they wanted a variety of artists as this set are very cartoon orientated and if anything quite childish. Not to my personal taste as the earlier cards focus on real photos of kaiju suits rather than sketches but at least the whole deck is varied for all.

Card Content- Rarities: Cards 45- 52 are a particular highlight of this merchandise as it offers a range of movie posters from around the world. Whilst some of the posters are a little wacky and badly drawn their kitche feel gives the deck a  vintage feel that would otherwise be completely reliant on the filmography cards and possibly watered down by the weaker character cartoon cards.

Card Content– Memorabilia: Finally Cards 53-63 act as a continuation of the previous set with a mish mash of movie photos and posters. These cards are not very remarkable and fall into the same category of cool ideas but poor delivery.

Concluding Thoughts- These cards remain a prized possession within my collection despite the somewhat varied quality within the deck. To be honest the deck could be split in half as the filmography and vintage poster cards are so much stronger than the other pieces that weaker card stand out all the more. It would be nice to see a revised version of these now we have Legendary Godzilla 2014, Shin Godzilla 2016 and most recently Anime Godzilla 2017 to pick from.

Alex is the co-founder of UK Kaiju along with Joe. He lives in Newcastle Upon Tyne in North East England. He particularly enjoys the late Showa Era which is the marmite years of Godzilla, notably vs Megalon and vs Gigan. He entered merchandise collecting at a young age with Star Wars Episode I captivating his imagination when he was 10 and has never looked back. As of 2016 he mainly collects X-Plus figures focusing on Shin Godzilla and Showa Era statues. His favorite kaiju film is Terror of Mechagodzilla 1975.