I grew up watching and re-watching two  Godzilla films: The Terror of Mechagodzilla and Godzilla 1984. To date, they are still my favorite two Godzilla films and I will normally pounce on any collectibles associated with the them.

The Return of Godzilla, or Godzilla 1984/5 for those who saw an English dub is a fantastic, dark retelling of the original Gojira, whilst also being a sequel to the 1954 classic. For those who haven’t seen the film pop on over to Amazon and check it out. The American edit has some interesting Cold War intrigue that has been added, not always in good taste, but this version is slowly going extinct in favor of the original Japanese version. However, in its defense, he American version does have a role reprisal by Raymond Burr as Steve Martian, but I digress.

The reason we are here is to discuss the 30 cm X-Plus Yuji Sakai Godzilla 1984 RIC.  If that elaborate title doesn’t mean much to you, you needn’t worry – there’s a lot going on that needs to be explained. Firstly, for any imperial measurements friendly folks, 30 cm is roughly a foot, and that measurement is its height. Secondly, Yuji Sakai – who’s that? Yuji is a well renowned sculptor in the kaiju fandom, and you can learn more about him by clicking here. The final bit of that title, the RIC, simply means that the figure has something extra going on. For more details on the X-Plus line, and some fun discussion around it give episode 28 of our podcast Kaiju Curry House a try.

So as a fan of the ’84 suit design, what can I say about this figure? Well, it’s gorgeous. Until a gigantic figure comes along, I would say that this is the definitive Godzilla 1984 collectible on the market – hands down. All the more so if you have gone for a RIC version which has the added feature of light up dorsal plates. I was hearing the iconic ’84 music playing in my head as I took mine out of the box. 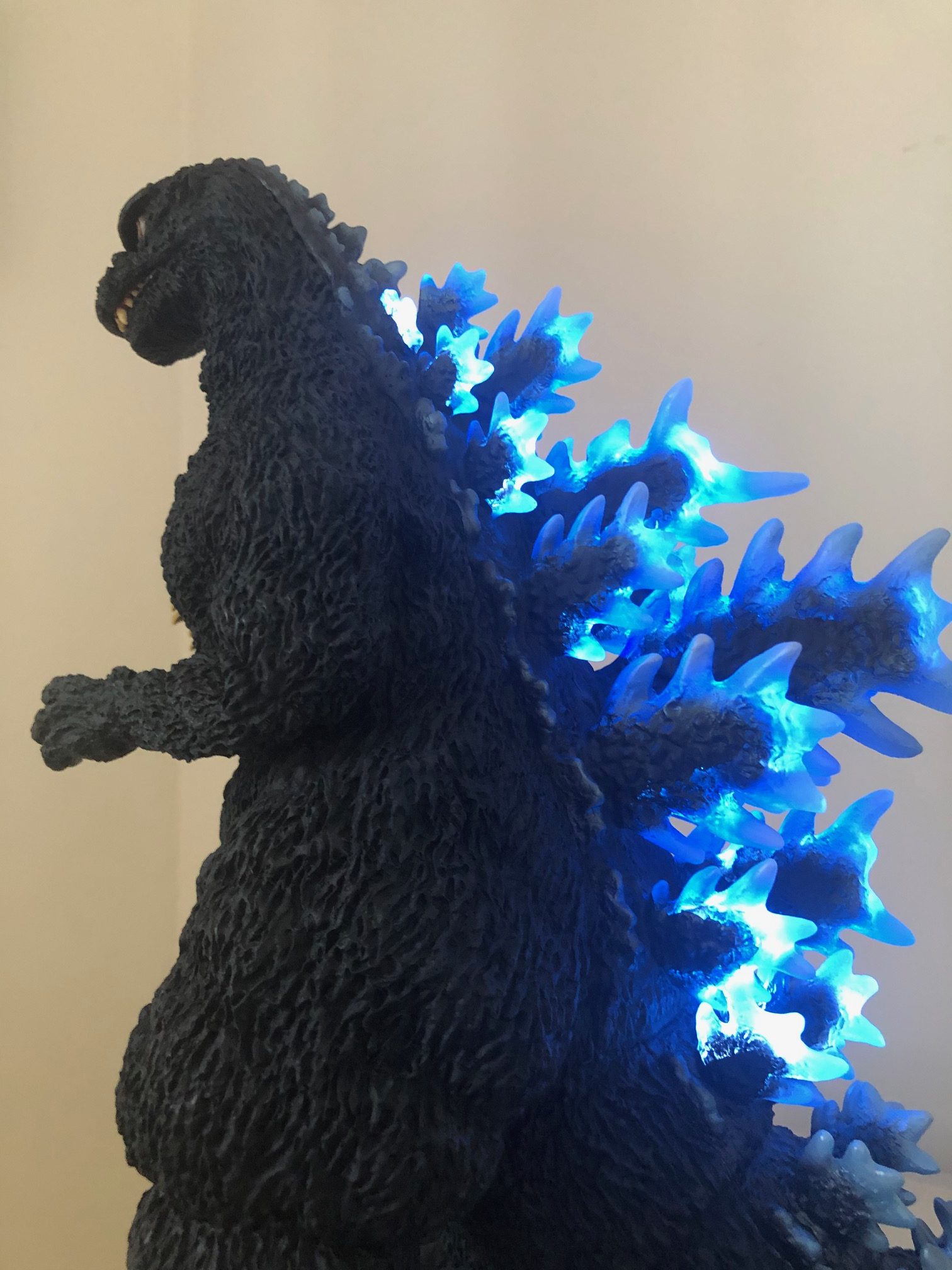 With a combination of fantastic paint app, sculpt and extra feature, I feel this is the definitive ’84 Godzilla collectible.

So to break this down, lets go over the pose and sculpt of the figure itself. As for the pose, it’s just Godzilla, walking along, as he would. What makes the pose fantastic, for me, is all tied up in the face. This figure isn’t roaring, like so many figures before. Instead, its mouth is closed in a sort of snarl, which is very much in character with the Godzilla from the film.  The other great thing about the face is the eyes. The suit in the film had fantastic eyes, and they would have been goofy if not for the malevolence of the character itself.

To take the next aspect of the figure, the paint job/ the coloring, it is spot on.  Its got a jet black paint job which I don’t feel any of the photos I have seen online (save the official promotional  ones) do it justice. I love the darkness. It’s like you are looking at him, already a charcoal black creature, at night. The second striking part of the figure is the dorsal plates . Mine has the blue translucent light up ones, and they are a sight to behold. When the lights are not on, they are shaded just the way you would want them to be. A grayish white with subtle blue highlights that glow a proper blue when the light feature is engaged. 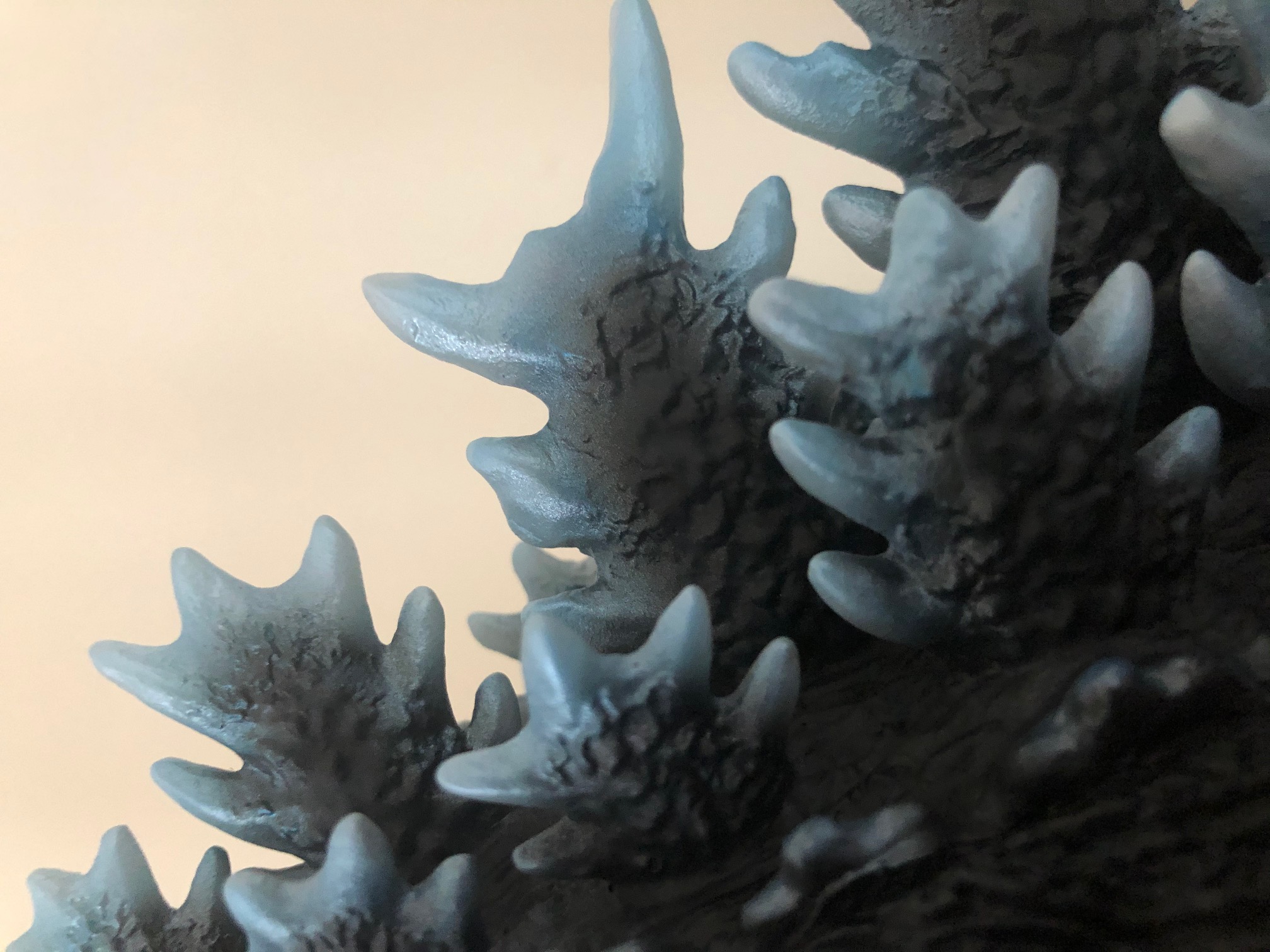 The dorsal plates, even on the RIC with the blue highlights look great.

The one quirk I will call out as potentially being distracting (that only really applies to the RIC version) is the paint application on the back plates. So let me explain: the plates are textured, and this gives them crevices, nooks and crannies – which is exactly what we want. However, if the paint hasn’t gotten into every one of these, light will shine through quite dramatically. On my figure I had two spots, which honestly I was able to cover with some black poster paint. As the paint used on this figure is jet black, you don’t really need to worry about paint matching and I solved the problem for less than 50p and a minute’s worth of time. So what does this potential issue look like? If you are familiar with the concept, it is very much like a dead pixel that is stuck on white. However, like I said, it is easily corrected and is just a quirk of the lighting effect combined with the figure texture. With a standard figure, this issue is non existent.

Another paint feature that I absolutely love are his teeth. I have yet to see an X-Plus figure with just the right shade of bone white. As the snarl is such an important part of Godzilla’s characterization in this film I’d wager that extra care was taken around this aspect, and indeed the sculpt and paint job done around the mouth to complete this effect is inspiring – Yuji Sakai at his best.

The face is arguably one of the most iconic traits of the 84 film as the suit, puppet and cybot didn’t all quite marry up. However, for suit accuracy – this figure cannot be beat.

For me, this release has scratched an itch that the first X-Plus 30 cm ’84 sculpt didn’t quite satisfy.  The X-Plus Deforeal sculpt captured the personality with the head, but none of the prior attempts have really caught his likeness completely. In this release, the novelty of having a snarling Godzilla rather than the ever popular roaring sculpt really differentiates it from the majority of Godzilla figures out there, X-Plus figures included. Additionally, the paint application, being so much darker, adds so much seeing as this Godzilla is only ever seen at night.  I  honestly cannot say enough good things about this release and I would strongly encourage any fan to seriously consider grabbing it before they become unavailable, it is certainly one of the crown jewels of my collection.