Any Gamera fans out there? I’ll admit to being one, happily. If you aren’t familiar with Gamera, he is the Daiei kaiju created to rival Toho’s ever popular Godzilla franchise. Sort of a Bugs Bunny vs Mickey Mouse dynamic – you can love both, but different characters with a certain different appeal.

My first experience with Gamera was a VHS rental, and funnily enough, it was the original 1965 original – Gamera: The Invincible, the first film. Fans now are lucky enough to have good folks like Arrow Video who release amazing limited, and mass market sets where you can get the entire series of films in one collection. For me, it was a personal quest to find more Gamera content, which by nature of the number of Gamera films made, was always harder to find than Godzilla. Needless to say however, my first Gamera film always held a special place in my heart and I still get a lot of nostalgia butterflies when watching it.

So I was very excited upon learning about the 1965 30cm release from X-Plus, and additionally that it would have a RIC extra. What those of you who are maybe not die hard Gamera fans may be missing is that 1965 was the year, Gamera: The Invincible was released.  Naturally, I jumped on that bad boy and I am really glad that I did.

So, after making the trek down to Parcel-force to get dinged with the customs charge we folks in the UK love and cherish so much, I excitedly drove home with my prize in hand. 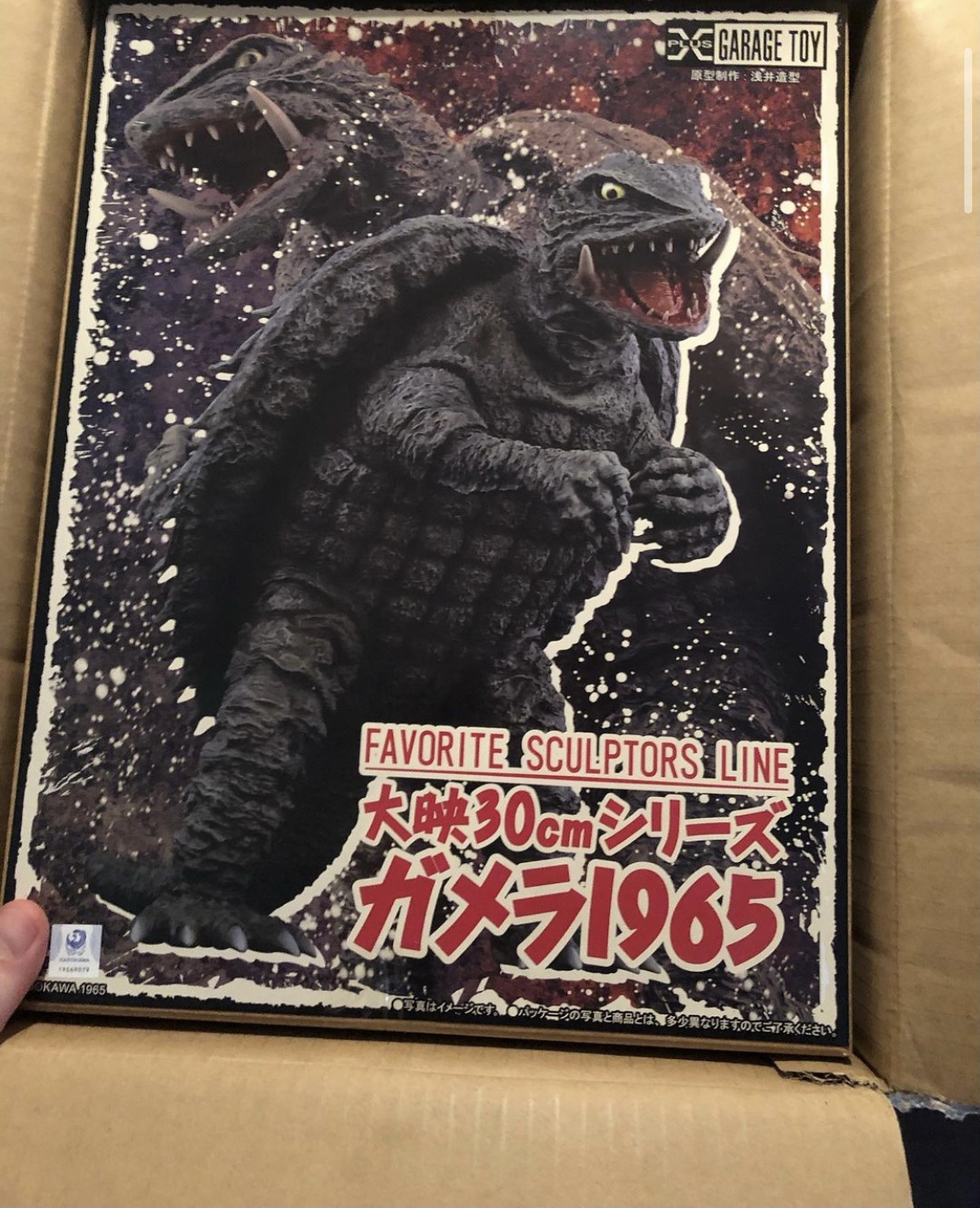 Here is what greets you when you open the exterior shipping box.

The box itself is standard X-Plus, and I have to say, every time I get a figure from them, it feels like the packaging gets better. On the other hand, I could just be so excited that it feels like forever getting the figure out of the box!

The figure itself is a perfect pose and likeness from the 1965 film – but with one exception – COLOR. Frankly, I dig it. Gamera isn’t that colorful a kaiju anyway, may as well live it up a smidge.  The figure also has a commanding profile and, because of the shell, and Gamera’s more upright posture, it seems larger than many of the other X-Plus figures I own. For those of you who own the 1962 30cm Godzilla, you can probably understand. Yes, it is a 30cm tall figure, but the ’62 is a chonky boy and you get a lot of figure for your money. Gamera has this feeling, but because he has a small tail, he isn’t a shelf space hog, which is really nice given the shelf presence it has. 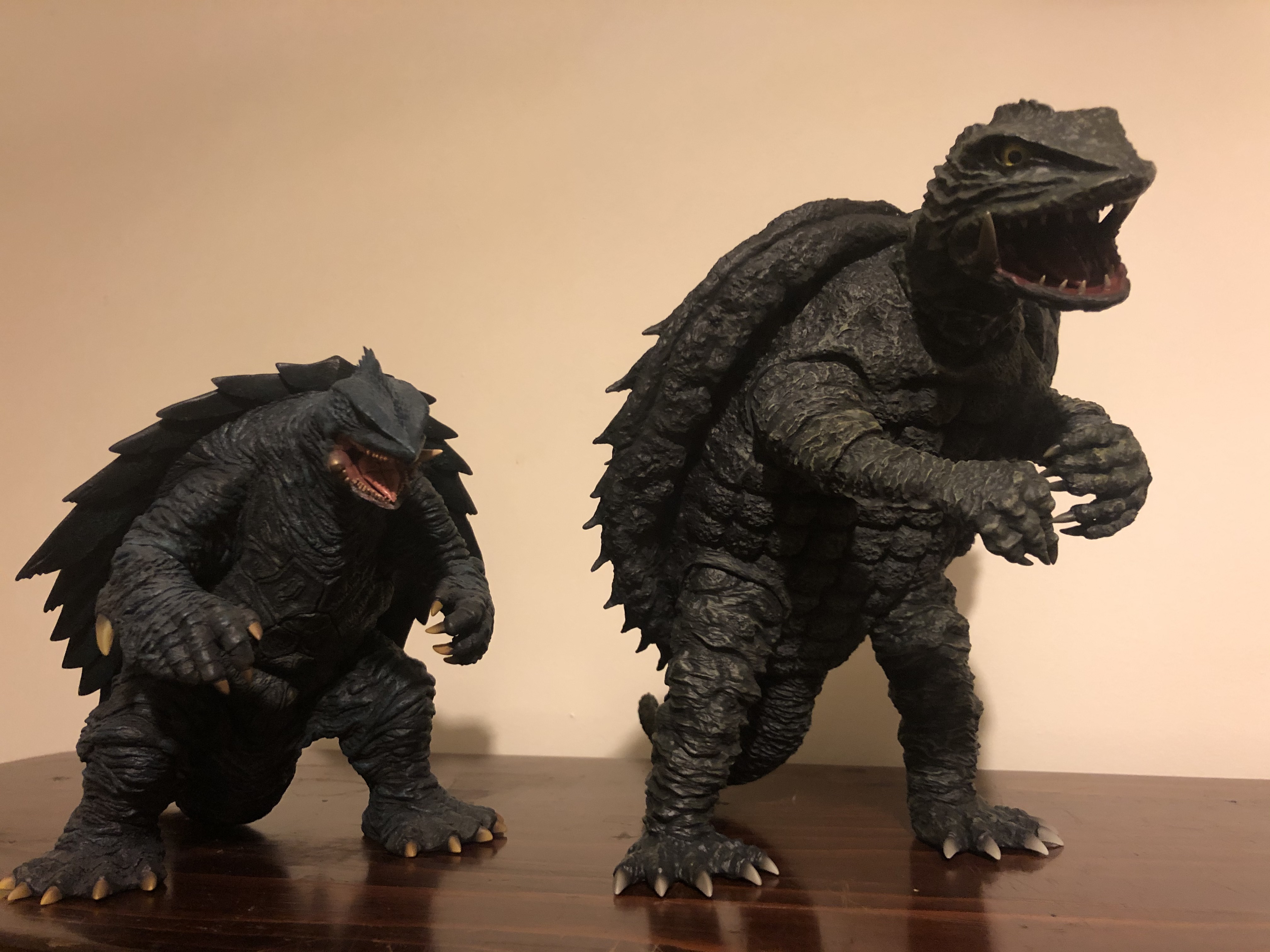 This is why you get 30cm figures!

The other great thing about this figure is the balance. The tail does not touch the ground, and it stands very solidly on two feet. It has a nice center of  gravity thanks to the shell and the splayed out arms. So Gamera, thus far, does not suffer from becoming a figure with a great pose that eventually leans and falls (the vinyl slowly gives way). This really impresses me and I have to give the company kudos for balancing the figure so well.

So I mentioned the shell above. Gamera’s shell is a very iconic part of the character design and I have to say that the spikey carapace is here in all of its glory. It’s not sharp spikey mind you. You’re not going to get hurt taking it out of the box, but the detail itself is fantastic and one of my favorite elements of the character was beautifully captured and rendered. 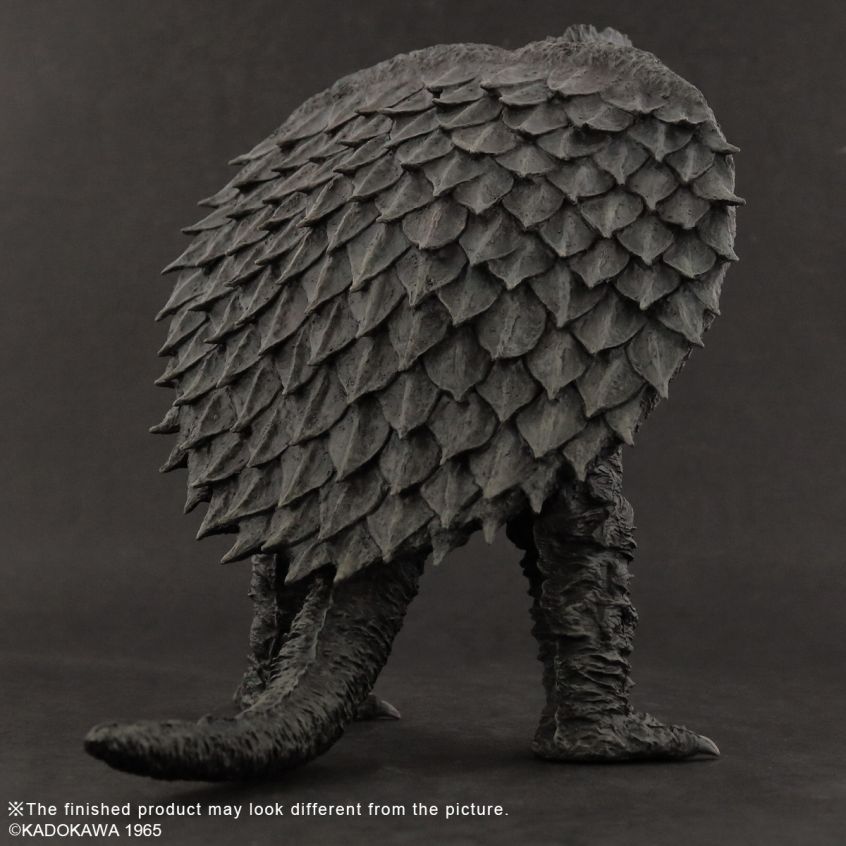 The light in my office isn’t up to par with capturing the spikes. But the thing I love about this manufacturer is the paint always matches the prototype quality. Photo by X-Plus.

The RIC extra feature (which is really just the feature as this was a limited RIC only release) is the presence of light up eyes. In the 1965 film, as it was black and white, Gamera was given very bold light up eyes to make them stand out. There could well have been something more to this as this particular kaiju is a silicon based life form and can ingest fire. So maybe the glowing eyes are a tell of the inferno within this fire breathing and consuming proto-terrapin. For me, this feature, great as it is to have one, doesn’t add much. The eyes are small and because of the way you would probably pose the figure, you aren’t going to see both at the same time. The eyes are also painted (classic X-Plus not skimping on a single detail), so relatively little light leaks out. I think a base with the name, or a glacier or flaming train wreckage could have gone a lot further. Still, it is nice to have something and it is fun to play around with. 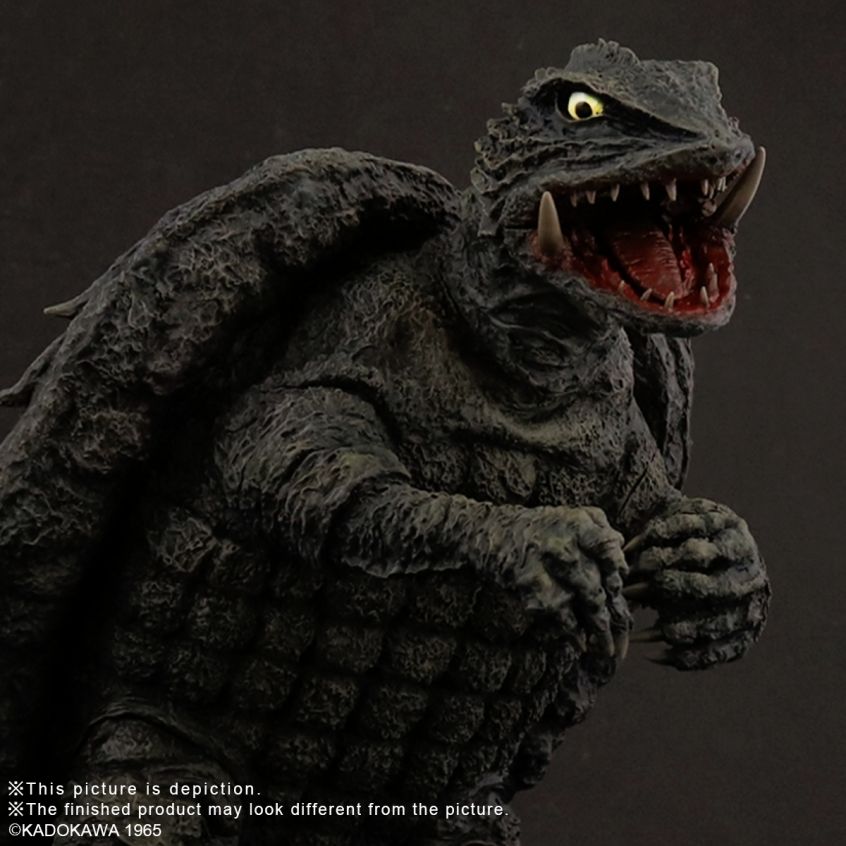 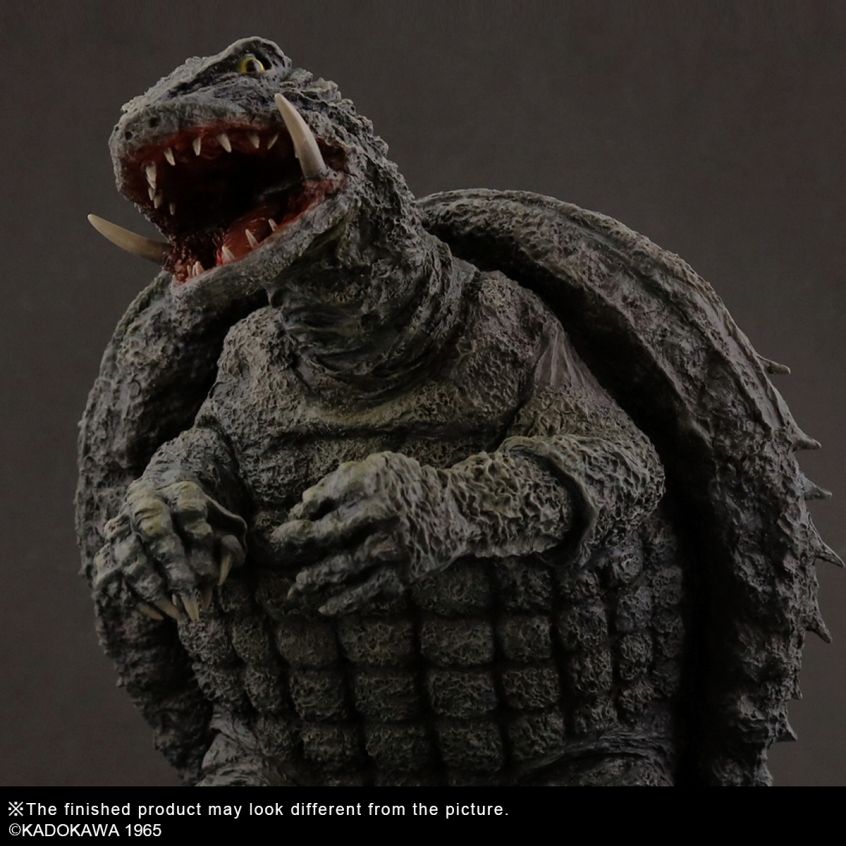 As I write this, it is Gamera’s 55th birthday, the original film being released November 27th, 1965. I am also fortunate enough to have the fantastic Arrow Video box set on order so that I can enjoy all of the content and Gamera goodness they were able to bring together. I am so glad that I got this figure as it ticks a box with my inner child. It may not be the rough and tumble figure that little me wanted at the time, but it is just too damned cool. Inner child me and adult me have come to a very happy compromise over it. X-Plus keeps knocking them out of the park, and this figure was no exception.

Thanks for reading folks, and as always – KEEP IT KAIJU!