I want to put into context what I write below. So before you go any further, hear me out.

I love stop motion animation. I enjoy detailed figures, and I am somewhat tight for space.  SH Monsterarts should appeal to me, and it has on more than one occasion. To date I have purchased two figures from their line, and both have been Ghidorahs. I generally will not pay a lot for an articulated figure unless it is REALLY articulated. What’s the point anyway? I may change the pose a few times a year and for that I do not need to pay a ton of money to get what will make me happy. The reasoning therefore for me purchasing Ghidorahs is because they are attractive in detail, and they are hyper articulated. So in my mind the craft justifies the price.

My first Monsterarts figure was the ’91 Ghidorah, which may be their best ever release. It came with stands, effects and the figure itself seems as though it was picked right off the screen. It is a strong release. The joints hold their poses, the paint application is stellar and the lightning breath (I know they are called gravity beams) that came in a pack of three – one for each head – was a nice touch. The stand for the breath effects was a nice add as well. So to be blunt, the only experience I have had with them, I have been spoiled rotten.

So now lets move on to a much later release. The 2019 Ghidorah that Monsterarts has released as part of its Monsterverse collection. Obviously the crown jewel between the much smaller contenders of Godzilla and the Rodan-Mothra two pack that they released. 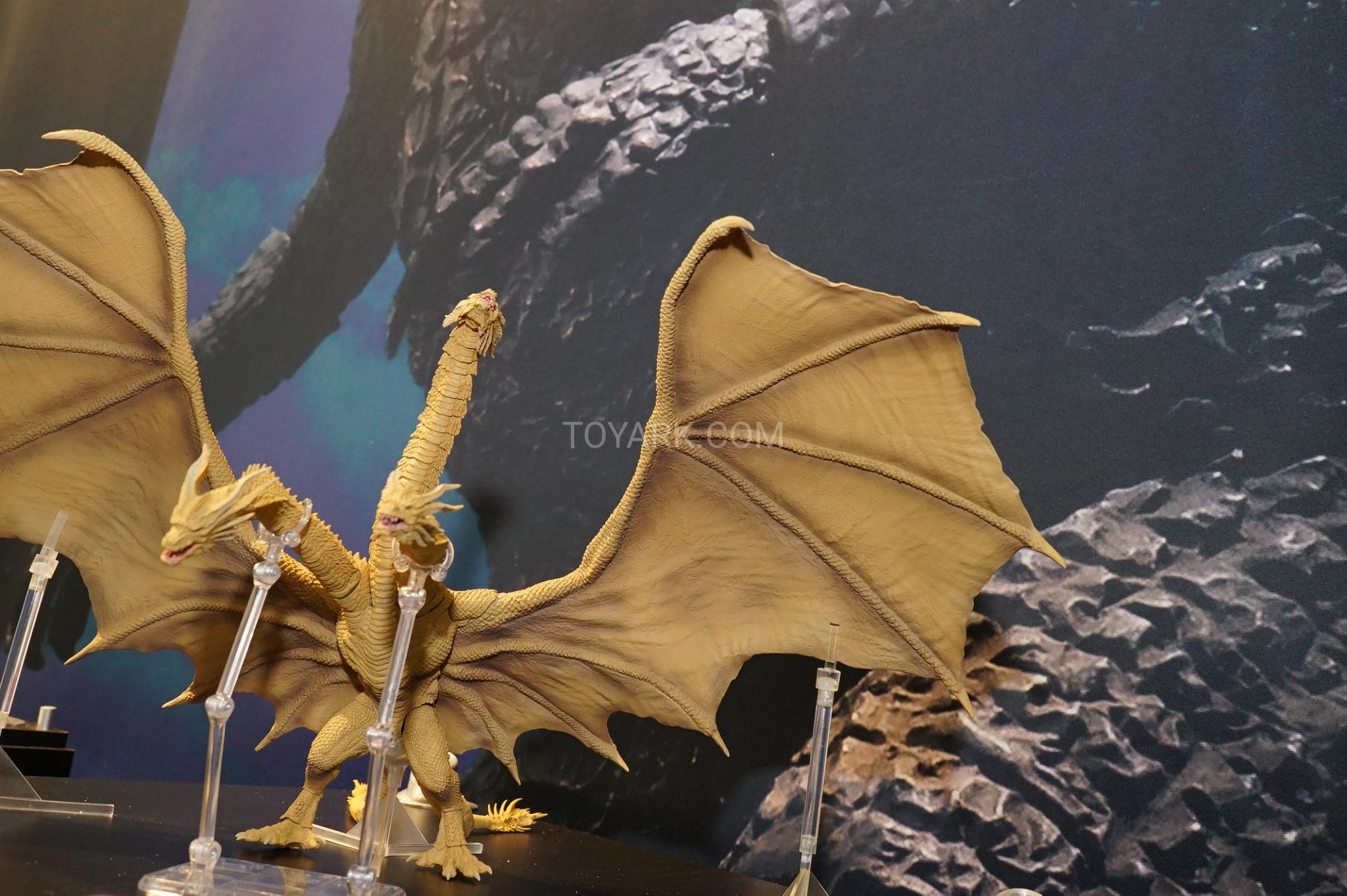 So, upon initially seeing  the promotional images for the figure, I was blown away. The yellow-gold coloration in the images is a bit lighter than the ’91 styled version and is very eye catching. The wings also look fantastic and give it quite a presence. It also comes with stands – I was pretty much sold, and indeed the concept was sold to me as I purchased one.

However, unfortunately, having now received the figure, I am not impressed. Virtually everything that I enjoyed about the previous figure in my collection is not apparent in this new figure. The word “cheap” comes to mind, which isn’t good considering what I paid for it.

Firstly, lets talk about the paint application. It is terrible, and quite a different color from the promotional images. Instead of a gold yellow, we got a mustard brown, leaning towards the brown. The few highlights that are on the figure are monochrome and are air-brushed on, so they do not look that great up close, which is presumably how you would be checking out on a figure like this.

On my figure there are also scratches in the paint job, as well as splatter (picture below). So again, not particularly impressed with this figure. 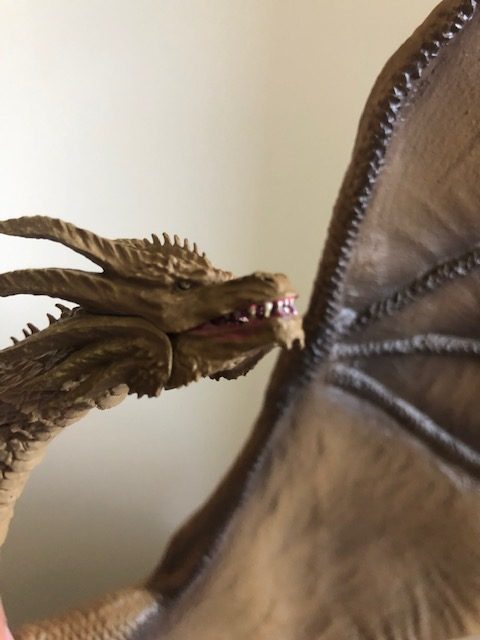 The articulation is a bit of a nightmare. I do not expect ball joints to stay in all of the time, and I know that there are fixes, but fresh out of the box, I expect the figure to be a little stiffer than it is. All three of the heads, both tails, a wing and a leg have all fallen off of it, and all of this happened before I could even get it to pose the way it is in the promotional shots. The wings themselves only come in one fixed position, which is thrown out, so no folded wing poses for this figure. Which is OK I suppose, but at the same time it affects the balance of the figure and it creates a space problem.

So lets talk about the sculpt. In all honesty, it is good, and it is a great likeness . No problem with the sculpt, sculpt is fine.  The only problem I have with the sculpt with regards to the figure the the amount of flash around the mould lines. “Flash” for those who are not overly familiar with the term is the raised line in a raw mould. These occur because when two sizes of a mould are pressed together, the small area where they meet allows for a little product to get in. If you like putting together resin kits or models you are probably familiar with these and trim them off.  So if they are really noticeable on the figure, I have a bit of a problem. The area where I feel they are the worst are on the wings and tails, areas that will unfortunately get looked at.

I apologize in advance for the negativity, but in this instance, this is a high value item that I was just not impressed with, and I would want to help others avoid the same disappointment. The figure will no doubt have those that adore it, and enjoy the limited, but present amount of pose ability. But for those on the fence, may I suggest looking at my previous review of the X-Plus GMK Ghidorah which has a similar price point.